What does it mean to be disabled? 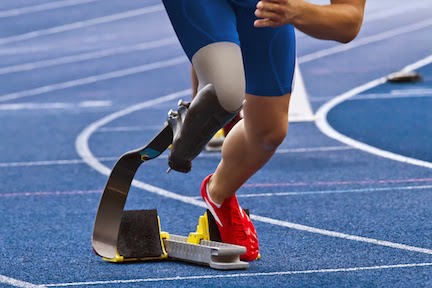 The term “disability” has numerous definitions, and its real meaning depends on the context in which it is used. A disability for one person or group may not be a disability for another.
In general, a disability is basically anything that limits your body or mind in any way. So basically, any medical condition is a disability. A condition does not have to severely limit the body in order for it to be a disability in this sense.
For example, if a vet has a shoulder condition that makes it impossible for him to raise his arm straight overhead, he wouldn’t really be all that limited in his ability to do the majority of activities. Very few things require someone to be able to raise their arm straight overhead. It does, however, limit his arm’s function in some way, so it is still considered a disability. A completely healthy arm would be able to lift overhead.
“Disability” is defined differently, however, when looking at things like Military Disability compensation. An organization can define a disability however they want, and both the DoD and the VA do just that.
For the VA, a medical condition must be service-connectedin order to be considered a disability that qualifies for VA Disability.
For the DoD, a medical condition must be service-connected AND make the service member Unfit for Duty to be considered a disability that qualifies for DoD Disability.
As long as a condition fulfils these requirements, it will be eligible for Military Disability Benefits.
Now just because a condition is officially considered a disability by the DoD and/or the VA, it may still not qualify for any disability benefits. This is where the seriousness of the condition is taken into account.
The exact type and amount of compensation given for a military disability is determined by the Military Disability Ratings that are assigned to a condition based on the laws and regulations of the VASRD.
If a disability doesn’t really limit the overall ability of the vet to function, then he will be given a 0% rating. As the severity of the condition worsens, the rating percentage will increase.
The exact rating assigned to each condition is determined by the VASRD. The VASRD was written by a group of lawyers and physicians who went through the various body systems/parts. It attempts to provide fair ratings for every condition, although it does fall short at times.
For example, the ratings for all hearing conditions are rated on how bad the hearing is without the use of a hearing aid. All vision conditions, however, are rated on how bad the vision is WITH glasses or contacts. How is this fair? If someone can hear perfectly with a hearing aid, isn’t that just as good as someone seeing perfectly with glasses? Why should people with hearing problems get more disability compensation than people with vision problems?
While there are definitely problems like this in the VASRD, it is the law, and all military disability cases are determined based on its regulations. No one is exempt.
So, getting back to our original question, a disability is basically any medical condition that limits the proper functioning of the body and mind, but for it to qualify for military disability, it must fulfil all the requirements that the DoD and the VA have in place. The seriousness of the disability only comes into play when the Rating Authorities assign ratings to each of the conditions. The more serious the disability, the higher the rating and the more compensation it should receive.
PrevPreviousSecretary McDonald Announces VA Overhaul – Let Your Voice Be Heard!
NextNew Veteran Suicide Prevention Act in CongressNext
Subscribe
Login
Please login to comment
3 Comments
Oldest
Newest Most Voted
Inline Feedbacks
View all comments

Thank you sir. I appreciate your advice.

The key to Gulf War Syndrome is that it isn’t really a condition at all—just a catch-all term used to identify seemingly random and unrelated symptoms that many service members who served in the Gulf War started experiencing after their return.

The only benefit to having Gulf War Syndrome diagnosed is that it automatically presumes that each of the symptoms are service-connected and thus qualify for compensation.

Now since all of the symptoms that your VSO says to call “Gulf War Syndrome” are already in your service medical record, they are all already considered service-connected. Actually calling them “Gulf War Syndrome” would do nothing. You would not get a single benefit by using this title. You will get the same disability for all of those symptoms/conditions regardless of what they are called.

You’re also right about being hesitant to claim something that has never been officially diagnosed. Since no physician has ever called your condition Gulf War Syndrome, using the title may actually end up slowing down your claim processing, and could even hurt your outcome.

I suggest not claiming Gulf War Syndrome and instead simply listing each of your conditions/symptoms separately on the claim form. You will ultimately get the same ratings and benefits while avoiding any of the hassle an undiagnosed title would cause.

What does my VA Disability Rating mean?

We use cookies to ensure that we give you the best experience on our website. By continuing to use this site, you are consenting to their use.Accept & ClosePrivacy policy